For those not familiar, Florence’s BIGGEST LOSER is a program of the Burn & Learn initiative.  Over 10 weeks, United Way of Florence, and its partners, work with participants, leading them on a healthy lifestyle, and weight-loss journey. Program director, Stephanie Navarro, knew that having a successful program meant getting the right scale for their contestants to be weighed and judged on. She had no doubt that Toledo Carolina, Inc., known widely around North and South Carolina as “The Weight Specialists”, would have exactly what they needed in a scale….accuracy and reliability.

In 2014, United Way President, EJ Newby, contacted Toledo Carolina about providing a scale for Florence’s Biggest Loser. After learning how the contest would work and what the needs were, Toledo Carolina knew the WSI-602 person weigher would be the perfect solution for ensuring accuracy. Furthermore, Toledo Carolina offered to provide the scale as a donation in support of the community, and for further use for years to come.

Toledo Carolina recently visited with some of Florence’s Biggest Loser’s 2015 contestants and directors during a scheduled and mandatory weigh-in at The United Way. We were thrilled to get to speak with contestants Monk Jordan from Olanta, Carrol Bazen, from Lake City, and William Soolua, from Florence. Each had their own story about why they were motivated to participate. Monk Jordan’s main motivation was to lose weight for his daughter’s wedding. Carrol Bazen, a pastor at Grace Free Will Baptist joined for the team support, accountability, and the motivation provided by the people he met. William Soolua, with Pee Dee Community Fellowship, said he joined simply because he wanted to live longer, and because of the peer pressure he received from Jesse Parker (which he really appreciates!). 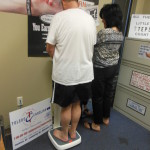 Monk Jordan weighs in as the current leader of Florence’s Biggest Loser.

The positive energy was infectious at the weigh-in, and it didn’t take long to see that the scale donation is paying off in pounds. In January 2015, the contest drew in 72 participants and so far, 8 weeks into the contest, over 1,250 combined pounds have been lost! Program directors Stephanie Navarro and Wendy Bird have, as the contestants stated, “done an outstanding job at running this program smoothly and keeping everyone on track and motivated!” Toledo Carolina is proud to be a part of a program that is positively changing the lives of those in our community.